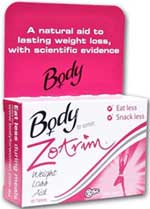 BSc Body Zotrim is a herb-powered diet pill designed specifically for women. The pills are manufactured in Australia by Body Science International and are available from a wide variety of retailers as well as online, so residents in most territories should have little trouble in sourcing a supply of Zotrim.

Body Science International supplies a range of sports and fitness clothing, equipment and supplements. Their name is known and respected all around Australia and when it comes to product promotion they can certainly talk the talk:

What is Zotrim and How Does it Work? 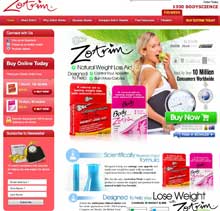 Zotrim is an appetite suppressant. It works by creating a feeling of satiety or fullness.

But once the marketing spiel has been pulled aside will the product be able to walk the walk and deliver the promised results? Let’s take a closer look and see.

A full ingredient profile and all inclusion rates are provided on the product packaging, but the manufacturers fail to supply any inclusion rates on their official site. Each tablet contains:

Two to three tablets should be taken before meals up to a maximum of nine tablets per day and the manufacturers recommend taking a reduced dose (2 capsules) for the first 2 weeks of use.

Zotrim has been tested on numerous occasions and the results of all tests are admittedly good, but there is some doubt as to how much control the researchers exerted over their studies. In one study, published in the British Journal of Food in 2007, 70 healthcare professionals were asked to take Zotrim for six weeks in ‘an open label study’ and attained the following results:

Zotrim has received quite a lot of media exposure, and the manufacturers are keen to capitalize on this, but the mentions the product has received cannot always be seen as a recommendation. Zotrim was indeed mentioned in Health & Beauty Magazine. The product tester, Maggie Wood from Bristol, England, took Zotrim three times each day and also visited the gym three times a week, but only succeeded in losing 2 lbs.

It is also true that the British nutritional expert and TV show host, Professor Lesley Regan mentioned Zotrim in an article published in the Daily Mail, but her words do not read like a recommendation: “Only one company sent a paper showing a clear link between weight loss and their product—a herbal diet pill, called Zotrim . . . But even when diet pills are shown in studies to help weight loss, the results can still be meaningless. The secret is in the small print.” Lesley Regan appeared on BB2

The manufacturer’s site provides a wealth of positive feedback on the product, but it is sometimes unclear how much of the dieters’ boasted weight is likely to be attributable to the formulation:

“I have been able to pass on my good food habits to my whole family. My husband has also lost weight due to decreased portion sizes and my family is much healthier in general.”

“More a filler upper than anything else. They bloat you out – if this helps with your diet -as you have a problem with always feeling hungry then recommended.”
“Don’t feel any benefit. Maybe I’m not doing it right but it says try to eat smaller portions which I have but I don’t feel they have worked but maybe they’ll work for you.”

The manufacturers warn customers ‘each capsule contains 11.2mg of caffeine’. Caffeine has known side effects, so their statement appears to show a responsible attitude, but an 8 oz. cup of instant coffee usually contains 27-173 mg of caffeine so the caffeine content should not be an issue to most users. The manufacturers also admit a few customers have reported feeling of nausea so they recommend people with health issues consult their doctor before commencing supplementation. We feel the same advice also applies to pregnant and nursing mothers.

Body Science International appears to be a reputable company and although we consider their use of media coverage a little misleading, we admire their honesty about important matters like the possibility of side effects. We think it unlikely that the majority of users would experience any negative issues from the use of Zotrim, but we also feel the potential for weight loss is just as unlikely. Customer feedback suggests that any weight lost by past users is more likely attributed to lifestyle changes that to Zotrim.

Better appetite suppressants are available, but it is important that dieters be aware that appetite suppression alone is seldom enough to produce notable weight loss. Something more is usually required to burn off existing stores of body fat. Exercise could do it. So could some of the better fat burning supplements. We feel the Zotrim product could have been much improved by the addition of a fat burning ingredient, but, as it stands, we cannot add it to our list of recommended weight loss products.

Where To Buy Zotrim

The natural diet pill genre is currently being dominated Garcinia cambogia, a fat burner that can also help prevent new fat cells from being created and accumulated.

Garcinia Extra is the recommended branded product with 60% HCA, the benchmark ingredient of Garcinia Cambogia products.